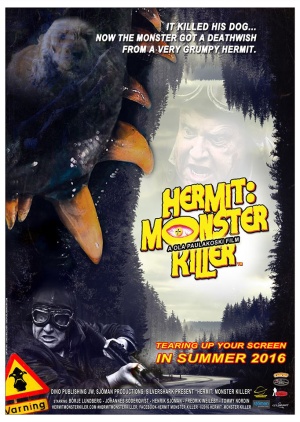 Finally wriggling its way to audiences is the Swedish indie feature, Hermit: Monster Killer. After years in production, it might be the first of its kind in Sweden.

Comedy and horror are combined in this low budget feature that has been in production and post since 2012. Inspired by both American genre films from the last 30 years such as Tremors and Grabbers, as well as the Norwegian Troll Hunter and the British Shaun of the Dead, the origins of Ola Paulakoski’s campy Troma-esque feature debut goes as far back as 2002 when the concept was first presented. The idea never faded and were almost executed a few times. Public bodies refused to fund the movie but after a crowdfunding campaign resulted in enough money to buy a camera, Paulakoski spent 6 months learning to use the camera and how to shoot films. -I have always been fascinated by spectacular monsters in movies and think that every type of film will improve with monsters in the story, Paulakoski told MovieZine in 2014. He describes his movie as a mix of monster movie and buskis, a type of Swedish “folk slapstick” comedy in film and theatre, and claims that a film like that has never been made in Sweden before.

The film, whose original title is Den gamle och monstret (meaning “The old and the monster”), was shot in two weeks and takes place in Värmland in Eastern Sweden. A region where people are happy. Clean air, crystal clear waters, green forests. Somewhere in that wilderness lives a grumpy old hermit and his faithful dog. The only thing they need to worry about are the brats who pinch his apples and the occasional lost tourist. It’s a good life, maybe a little lonely, but far from the worst you can have. The nearest town is a small place with a grimy pizza joint and a single cop who is trying to uphold the law. It is also home to Palle, a lucky loser who thrives quite well as the local rugby team’s mascot and is deeply in love with his beautiful girlfriend, Ulla. Sure, life is perfect, right? Or it was, until the day the bad thing happened. The day the MONSTER came! A mysterious beast that threatens to tear the town apart and eat every man, woman and pet it comes across! Soon the once beautiful scenery is filled with horror beyond fantasy! Only one man can stop the monster’s rampage: The old hermit and his hunting rifle. But is he past his sell-by date?

Swedish monster movies can probably be counted on two fingers. Hermit: Monster Killer is one of the two, with the 1950s alien invasion “classic” Space invasion of Lapland being the other. However, that movie was an American co-production, so technically, Hermit might be the first of its kind in Sweden. And even if it includes a space monster, the film is actually based on true events. -Years ago, I saw a short about an old hermit living alone with his dog. The hermit loses his dog in the forest [and] endlessly searches for his dog, and then the film ends with the dog coming home the next morning. I was joking with a filmmaker friend: What if the dog was killed by a monster? And I realized, oh my God! This could become a great horror film, Paulakoski told Fangoria in 2016.

Some of Paulakoski’s other projects in development include Swedish poledancing girls vs demons from hell and Dinorilla. Granted, the titles indicate more cheese and camp but if you think cheesy Swedish sci-fi fantasy flicks can’t go anywhere, you have forgotten the massive success of David Sandberg’s Kung Fury, which have been seen by 27 million viewers in its official YouTube channel alone. 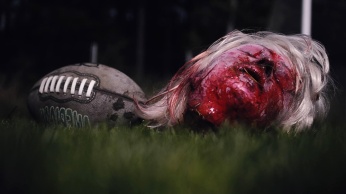 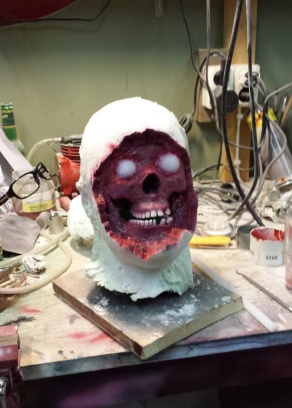 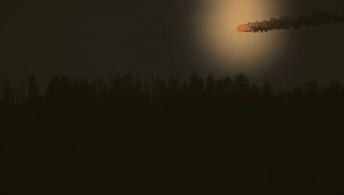 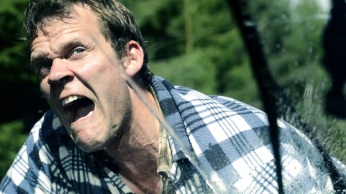 Hermit: Monster Killer features plenty of special effects, of which many are gory and most are practical. Outdoor foam cushions, contact cement, cotton and latex were used to build the alien, created by Fredrik Weileby. And even though the budget was so small that the production at one point ran out of gas money, almost all the kills were reshot after the bulk of the shooting was done in 2012. The reason; to add more gore. In spite the very low budget, professionals have contributed: Lead actor Börje Lundberg was in the Oscar nominated A Man Called Ove and Johan Falk director/writer Anders Nilsson contributed to the alien’s dialogue, which is the local dialect spoken backwards.

Hermit: Monster Killer has previously been shown at film festivals in France, Mexico, Denmark and Germany, and will have its Swedish non-festival premiere on March 15, 2017 at Skoghall Folkets Hus in Hammarö in Värmland. General distribution is yet to be decided.