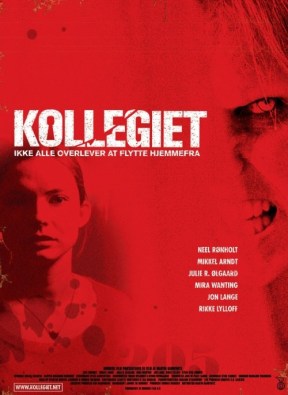 A ghost slashes students in this Danish teen horror that touches on Nordic social issues in a merger of two successful genres that were not common in Scandinavia at the time it was made.

As we have seen, for example when Norwegian horror movies started to take off in the early 00s, small countries don’t shy away from imitating existing films when they break into new genre territory. Denmark is another country that doesn’t have a big nor old mainstream horror scene, but they were realistic enough to choose the Asian ghost girl subgenre for one of their early efforts, Room 205 (original title; Kollegiet. Not to be confused with the Swedish movie Rum 213). The concept behind offering a local version of something familiar is to reduce the threshold for audiences as they often are cynical or critical against genres that culturally dominant countries traditionally do much better in. In this case, Room 205 does not copy the American slasher genre like Cold Prey did, but puts itself in the “Japanese” ghost girl genre where Ringu and The Grudge had made splashes a few years before. Room 205 is a bit more Danish, though.

Wanting to start afresh, the student Katrine moves from the province into a dormitory in Copenhagen and enrolls at the University. When she crosses conniving Sanne by getting together with Sanne’s ex-boyfriend, trouble arise. Sanne and her friends try to bully Katrine out of the dormitory by frightening her with an old myth about the ghost of a former resident. By accident, Katrine sets the ghost free, who then starts a terrifyingly gruesome attack on the dormitory’s residents. However, no one believes Katrine’s claims about a ghost and they accuse her of the series of brutal murders.

Kollegiet was remade in Germany as Zimmer 205 (or 205 – Zimmer der Angst) by Rainer Matsutani in 2011. Story: What happened in Room 205? Why has no one lived there for over a year? Katrin couldn’t care less: the 19-year-old student has landed a room in the dorm, and that means freedom! Freedom from home and her over-protective father. The semester is just beginning, and it’s time to make new friends, go to parties, have sex, and, of course, go to classes. Then, strange things happen in her room, and she begins to understand why no one wanted to move into Room 205 before her.

Room 205 had a lot of potential. What at first may seem like a teen slasher where the tormented heroine teams up with the outsider for justified revenge, quickly turns into a psychological drama about drug-induced hallucinations and questionable moral, and then finally switches over to the straight ghostly. This can be seen as layers of the same thing, although none of them prod deep. As a movie about teens or 20-somethings, the bullied misfit theme is probably the second most universal young adult concern after romantic relationships. There are also warnings against drugs and a story about growing up and becoming independent from parents and the dangers that may represent, but these subtextual wrinkles are ironed out by omission as the movie develops into a traditional story about a ghost trapped inside an object. Traditionals stories are not necessarily bad, and director Martin Barnewitz is actually executing it all with some finesse. The grainy video is used to great effect in combination with light and photographic effects, which adds an almost tangible feeling of eerie. The film is not thick in terms of atmosphere, but there’s enough of it to have an even balance between suggested horror and emotional distress, and a few gory scenes that are also well made, albeit small in scale. One could not expect Denmark to produce a full-on mainstream splatter film back then so we’ll have to accept this exchange between psychology, atmosphere and violence.

What is less forgiving is that the script is under-developed in some areas. The film takes place in a University environment, yet we see no teachers, no professors, no lectures. Also, there is no real police investigation of the murders. The major problem however is how the main character, the ghost, is not presented properly. It’s clearly the result of a victimized young woman, but the ghost itself is not sympathetic or even interesting enough to side with. We get that rape and bullying is not creating any nice vibes in a ghost but there should be some kind of purpose that justifies the unlocking of it, when unlocking is the key point of the story.

Add to this a series of character clichés and stereotypes, and you have what is essentially a typical Scandinavian “remake” of foreign genre entries. There is nothing original in a ghost girl story set in a high school environment, but as copycat films goes, Room 205 at least has a shimmer of Nordic social realism that makes it feel less polished than many of the films it tries to incorporate.