After wilderness stalkers and trolls, Christmas may be the new Norwegian horror theme. Reinert Kiil’s Juleblod is the second Christmas related horror film in three years. Have you been naughty or nice?

Coming from the director of The House, the horror comedy Juleblod is this year’s most twisted genre entry in Norwegian cinema. Reinert Kiil, a jack-of-all-trades in Norwegian film and TV, wrapped the shoot in February after 36 days of filming in 10 Norwegian cities. The bulk of the film, about 80%, was shot in Honningsvåg, the northernmost city in Norway, population 2415.

Juleblod, meaning “Christmas blood”, is to be taken literally, if nothing else than for the 150 liters (40 gallons) of theatrical blood that was used during the filming. Every year for the last 13 years, a killer has struck on Christmas Eve, giving him the nickname Santa Claus. Police investigators Thomas Rasch (Hoff) and Terje Hansen (Larsen) try to solve the mystery before the killer strikes again, but despite their efforts, it seems that Northern Norway will see the crimson again. Christmas Eve is fast approaching, and the investigators are fighting against time. A group of friends who are gathering to celebrate the holiday do not realize that a crazy Christmas killer is on the loose and nearby.

The idea for the film has lingered in director Kiil’s mind for quite some time. The script was actually written in 2008, and the film went into pre-production in 2010, with a cast and sponsors onboard. Kiil’s producer was Daniel Henriksbø, but the film was shut down when Henriksbø was tragically killed in an work accident during the making of another movie, The Veil of Twilight. In 2014, Kill made another attempt, now producing the film on his own. Getting Norwegian funds proved to be difficult, but when Gunnar Hansen – Leatherface in the original Texas Chainsaw Massacre – agreed to play Killer Santa, international money became a possibility. Unfortunately, Hansen passed away the year after, and Juleblod was again shelved. Kill went on to direct The House (2015) in stead. -That movie was easier to produce. Juleblod has been a battle, but thanks to a great team, terrific actors and awesome investors and sponsors, it turned out well in the end, Kiil says to Nordic Fantasy.

The relatively narrow subgenre of Christmas horror – in Norway, only one such feature has been made before and it did not get a wide theatrical release – was not really the genre Kiil was aiming for when he developed the movie. The original idea was to blend slasher movies and crime. -However, Christmas has [a certain] design, its own music and this very nice atmosphere. Especially if you get out in the country and to these small places, where Christmas has not been raped by the generic American holiday which you can see in the streets of Oslo and in the chain [stores]. For me it was important to achieve a production design that feels like it cost millions, even though it had to be kept on a modest budget, Kiil explains to Nordic Fantasy. To Radio Nordkapp he said this: -It is a movie for everyone. It is both scary and funny, and I am really glad the comedy has been well received, because it often is the jokes that are the hardest part to make in a movie. 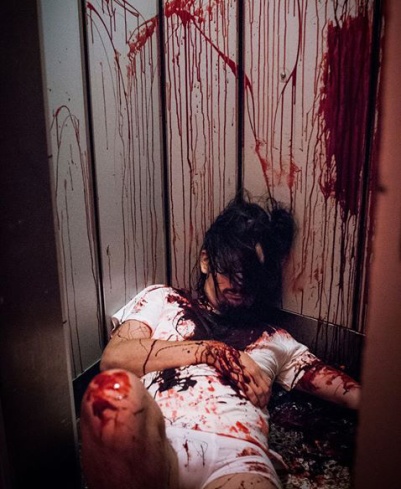 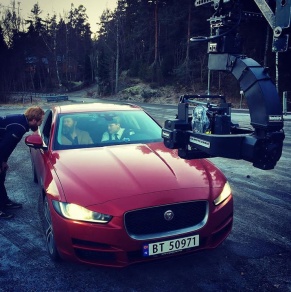 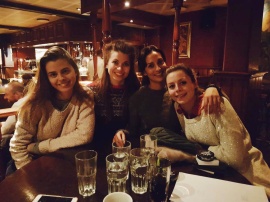 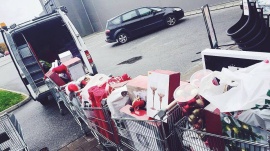 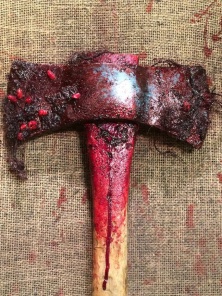 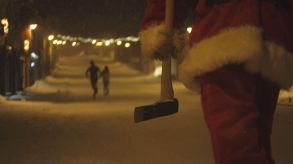 Further on the subtexts of the film, the writer-director explains that Juleblod is a “feelnastygood movie”. He hopes that audiences will pick up on both the regular and expected things about the Norwegian Christmas, on topics such as consumerism and gluttony, and issues like the penal system in Norway. The latter may not relate directly to Christmas at first glance, but Kiil relates it to Christmas in the sense that it deals with wether or not people have been nice enough for Santa to approve.

To achieve the special holiday atmosphere that is necessary in every Christmas movie, gingerbread cookies and gluewine were part of the production; one of the days was dedicated to the spicy warm drink and gingerbread cookies were around every day, since the film is sponsored by the cookie brand Berta and because the brown crisp cookies also were used in the set design. In fact, last Christmas was extra long for Kiil and his cast and crew. Every location was dressed for the holiday since mid November 2016, and in Honningsvåg topical decorations were up until well into February this year. -It’s safe to say that after two months of shooting, many of us were sick of red Christmas soda, Christmas cookies, Christmas dinners and decorations. And you know… soon… Christmas is starting all over again, Kiil says, sighing.

Speaking of raping Christmas; the holiday is no doubt the most commercial and trade oriented time of the year, exploited not only in movies but in every media and in the retail business. Christmas is, simply put, big. Juleblod has several high profile names, and when comedy is included – a technique used to soften the blow and make horror more palatable – the question wether Kiil is selling out to reach a bigger audience arises. -Absolutely not. My role model favourite directors don’t think in commercial terms, they want to make films defined by themselves. Directors like Paul Verhoven, Don Coscarelli and Stuart Gordon. I respect directors like that because they make movies they want to see, not movies everyone else want to see. And when they [get it right and have successful movies], it is because people are shocked, or get curious and surprised. Kiil says that enough generic movies are made, movies that stick to structures established in Hollywood in the 40s and 50s. Those are the simplest storiest to tell and there are plenty of people who can tell them, in his opinion. For Kiil, it is important to make movies that follows his own beat. –If you get disappointed or surprised, Juleblod will still be truly a Reinert Kiil movie. Not a random 00s slasher, if you know what I mean? That’s what I am aiming for. Granted, my movies do go in the direction of mainstream. I started in the most narrow subgenre [I can think of], a rape-revenge meta exploitation film, and then to a meta mockumentary exploitation art house movie, followed by a German-ish 1970s inspired chamber play. Even though [my new film] is a horror comedy, I hope and think you will see Kiil in it.

Kiil’s Christmas coolness
-I have seen many Christmas horror films and most of them are weak. Gremlins is a favourite. Many thinks it has lost a lot since it’s old, but I think it holds up. I like the atmosphere in that movie much better than most newer horror films, with a few exceptions. I’m very bored by CGI feasts, Kiil informs us. His favourites include Silent Night Deadly Night, Black Christmas (the original), Christmas Evil, A Nightmare Before Christmas and Tales from the Crypt, the Christmas episode.

As a director, Reinert Kiil is well known in Norway’s independent film scene, having directed several low budget features, including the Nazi ghost thriller The House and the exploitation film The Whore, which was an hommage to I spit on your grave. Juleblod is Kiil’s 4th feature film (his second to get theatrical distribution), and he has also worked on music videos, short films and as prop master and production assistant on a total of 61 films and TV shows, including Dead Snow and Lilyhammer.

Juleblod‘s cast includes some of Norway most well known actors, such as Stig Henrik Hoff (Kautokeino Rebellion, The Thing remake), Sondre Krogtoft Larsen (Lyst, Into the white, Detour), Jørgen Langhelle (Arn, The Thing, The Whore), Julia Schacht (Mammon, Next Door), Sigmund Sæverud (The House, Varg Veum, Hellfjord) and Frank Kjosås (Lilyhammer, The Heavy Water War). Additional actors include comedian and TV host Truls Svendsen, rock musician Thomas Felberg, Haddy Jallow and Karoline Stemre. The film is also the international feature dubut of Australian actress Kylie Stephenson. Marte Sæteren, known from the soap opera Hotel Ceasar, plays a macho, lesbian Northerner called Julia Buljo. Her character’s name is a hint to Kill Buljo, the action comedy directed by Tommy Wirkola, the director of Dead Snow and What happened to Monday. -She is quite macho. My character rather picks up women than boys, and she consumes dry fish and snus and drives snowmobiles. We have a great gang of burping girls here, Sæteren said to VG. She added that it was a challenge to be mentally present in every moment of the shooting. -[You have to know] what happens [every second in what is essentially a chase] in a slasher film. Most people have not experienced anything like that.

Juleblod is a low budget movie, but Kiil does not want to reveal the budget. He says that many viewers, as well as critics, thought that The House looked more expensive than it was, and this time, Kiil’s movie is even bigger, with celebrity stars, international cast members from New Zealand, Australia, Sweden and USA, and locations all over Norway. Reinert Kiil rounds off with a promise: -I am not afraid of the fact that my movie [is being launched next to some] of the biggest movies this year. Will we deliver? No matter what, it’s all on me. Time will show if enough people have been nice this year, and if they dare meeting Santa’s wrath 🙂

The film opens in Norwegian theatres on November 3rd, 2017 but was shown at festivals in Norway and Sweden prior to the official premiere, as well as having local pre-premieres.