Currently showing on Viaplay is the second season of Occupied, the Norwegian science fiction drama that is based on an idea by The Snowman author Jo Nesbø.

When the first season of Occupied premiered in Norway on TV2 in 2015, it was the channel’s biggest drama effort until then, and one of the most expensive in Scandinavia. The story was set a few years into the future, when Norway has elected a hardcore green party as the ruling party and oil production has been deliberately ended. This occurs in a time when the US provides itself with all the energy it needs, and wars in Arabic countries have strangled all oil pipelines from that region. That’s when the energy crisis hits Europe and Russia. They look to Norway with a hostile gaze in order to fuel their cars.

Harry Hole and Doctor Proctor author Jo Nesbø started writing drafts and treatments for the series in 2008, and was originally developing it for state broadcaster NRK. In 2013, NRK decided to back out, and Norway’s largest private broadcaster TV2 took over. The budget landed on 90 million NOK (9.5 million Euro / 10.7 USD), a record breaking budget in Scandinavian TV (almost twice the budget of an expensive movie such as Max Manus). The drama series, which was compared to Homeland by Vogue, was also an artistic challenge; it was one of extremely few sci-fi TV dramas to have been produced in Norway, so the production had to consider everything from futuristic technology to wether skinny jeans would be fashionable in 2020.

In the new episodes, set about half a year after the events in the first series, the Russian “silk occupation” of Norway continues, and neither the EU nor USA can solve the problem. USA has even pulled out of NATO. The season opens with the Norwegian Coast Guard and a Russian PMC guarding the oil installation of Melkøya engaging in highly aggressive manoeuvres. What starts as a small local argument explodes into a national then international crisis. The story arch sees individuals, corporations and governments pitted against each other, showing little to no trust. The resistance movement has been crippled and Norway’s prime minister Jesper Berg (Mestad) is in exile in Sweden. The new head of the security police has been approved by the Russian ambassador, but overall the second season revolves more around the international political scene, with portions of the story taking place in Brussels and Paris. An underlying theme is still what people would do or not do in order to uphold their traditions and physical prosperity. It is not a given that any of those would be sacrificed for “freedom”.

Key to the series is “an American president who wants nothing except protect himself and his country” and “a EU that does now know what it wants”, which more or less points to real political situations. However, the script has not been adapted to current affairs: -We did not have time to [update the script to Brexit or Trump’s election]. The series takes place in the near future and the world changes faster than we can update the script. But we do try to envision different scenarios, and then hope that reality does not catch up with out fiction, series co-writer Karianne Lund said to Filter in February. Showrunner and director of the first three episides, Erik Skjoldbjærg, told Kinomagasinet what drew him to the project: -Two things, to make a Norwegian political thriller, and the concept that 90% of the people would not actively resist if democratic freedoms were taken from us. Norwegians did not do that during WW2, so why is it like that? I wanted to follow the characters and try to understand. 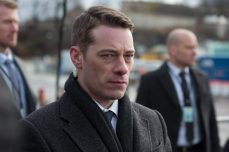 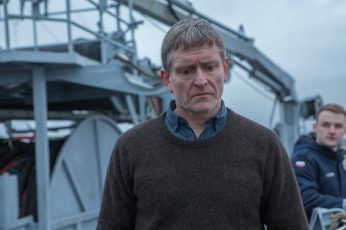 Local reviews for season two have been lukewarm. NRK’s Film Police rated the first four episodes 4 of 6 and said “the series will remain being the rather simple political action series about Russia occupying Norway”. Dagbladet gave the same rating and critized dialogue, the overdone seriousness and “perhaps too many political and judicial discussions”. Aftenposten was harsher and awarded only 3 of 6 in their review, in which they were not happy with neither the dialogue nor some of the story archs.

Occupied 2 recently premiered on the streaming service Viaplay in Scandinavia, as an experiment in distribution before it is shown on the competing linear channel TV2, and on Arte in France. Viaplay is a local competitor to Netflix and HBO, and is the main producer of the series. Occupied 1 can be streamed from Netflix in USA, Australia, New Zealand, Ireland, the UK, India, Canada, Belgium, Sweden, and the Netherlands.