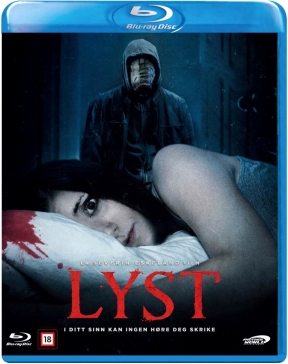 Norway’s first horror film in 2017, Lyst, is to be released on home video tomorrow. The discs are packed with extras and will be availabe all over Scandinavia.

It’s safe to say that the Norwegian horror film wave as calmed down lately. This year, only one straight horror film has premiered in cinemas so far – exactly, Lyst – and even though two more are coming to theatres before Christmas, Lyst is the first Norwegian horror film in 2017 to come out on disc when it arrives in stores on October 2nd.

Directed by Severin Eskeland, whose horror-thriller Detour (2009) was his debut feature, Lyst (which means something like desire, lust) tells the story of crime writer Lisa Rostorp who becomes a victim after a crazed fan brutally attacks her. She isolates herself in her apartment, trying to cope and get on with her life, but then she starts to experience increasingly strange events. Not only her psychiatrist but Lisa herself starts to question where reality ends and fantasy takes over. It doesn’t take long before she is convinced that her attacker is back and stalking her.

Lyst is claimed to be one of the most explicit and gory Norwegian movies, with old-school physical effects by Per-Ingvar Tomren, who previously made the killer-Santa movie Christmas Cruelty (2013). -Maybe I pushed the limits. Where other movies would have stopped, we went on [with the violence] and I think this is the toughest stuff that has been made in Norway. We had a test screening in Bergen, and several people in the audience asked us to stop the movie. They could not watch it, Severin Eskeland said to TV2 earlier this year. The film has been given Norway’s strictest rating, “18 years”, and was originally made to be shown at horror- and splatter film festivals. Lyst is the first (rape) revenge horror movie to be shown in Norwegian cinemas since Manhunt (original title; Rovdyr) in 2008, and opened in April.

The home video release on October 2nd by Another World Entertainment will be both a DVD and a BluRay. Extensive extras have been included on both formats:

In Norwegian media, Lyst was given a 5 of 6 score by Nettavisen and a 4 of 6 score by Kinomagasinet, Cinema, Dagsavisen, and NRK’s Film Police. Radio Nova awarded the film a 7 of 10 score. Bergens Tidende said the film was “Norway’s most grotesque horror movie ever”.

The BluRay will also be release in Sweden on October 9th, and is already out in Denmark. Non-Nordic release dates TBA.