Sometimes you encounter movies that are so unique, so game-changing and so weird that you have a hard time dealing with them. Absolute Xombies 3D is exactly that type of movie.

Written and directed by Johnny Markussen on a low budget (about 50.000 dollars) and tens of thousands of manhours, Absolute Xombies 3D is a Frankenstein-ish movie set in a postapocalyptic world where civilization is lost, mankind marginalized and the dead roam the Earth preying on the remaining survivors. In this world only the toughest survive and among the toughest is Edwige, former international troublefixer for hire. Now on her last mission to capture her former master and lover, Franco, who had betrayed her. However, they are both chased by hitmen and must join forces to survice, not only from their human foes but also brain-starving zombies. 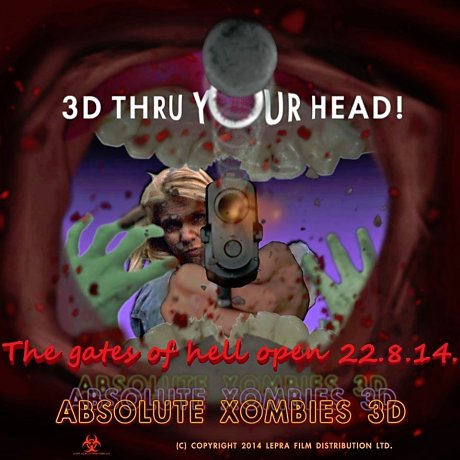 To some, Absolute Xombies (which comes in both 2D and 3D) will be the crappiest film they’ll ever see, and it’s true that on a purely technical level the film does not reach the best amateur films out there. Lots of chromakey halos and such. However, the style of the movie is so far out and unique that what you are seeing is on a completely different level than the normal good/bad scale. Ordinary qualities do not apply here. To (what I presume was to) overcome the budget and technical difficulties of the script, digital animation, greenscreen, models, dummies and practical effects have been combined into a mishmash of live action, animation and special editing. On top of that, a 3D version was made to add to the visual galore. There is almost no sequence that does not include some kind of digital low-fi effect, resulting in a movie that feels like a mix of Troma, Monty Python intro/pause sequences, experimental guerilla film making and low budget cartoons. It’s safe to say that no other movie looks like this one, at least none from the Nordic region, even though similar techniques have been used elsewhere. The film is so stylish in all its glorious trash that it definitely enters the so-bad-its-good area of the map. Prepare to not marvel at incredible images, delightful details or amazing apparel; it’s quite fascinating to sit through a movie where everything papier-maché can happen and you never know if a tsunami of animated blood will wipe out a village, or if hundreds of zombies will attack, because if you copy-paste that one guy in zombie make-up who acted in front of a greenscreen in someone’s basement, you have unlimited zombie extras. That’s the idea behind some of the effects here, and it’s so weird and cheesy that it’s the exact opposite of Michael Bay’s movie, which are also perversely stylish while still sucking.

While the story is slightly slow in parts, in terms of getting dangerously close to being a series of interconnected events road movie-style, the special effects and the violence keeps the movie going at a good pace. That’s a sign of a good B-movie; story is not always the most important part, and neither is acting, which is so-so. But hey, nobody was paid, so consider the Norwegian accents a bonus. You’ll notice that Silje Reinåmo, the lead actress, is the only professional actor in the cast. She was a huge success in Thale, but because Absolute Xombies is a completely different film, her acting skills are not allowed to come through completely. However, I can see her doing more action roles!

The sound is pretty bad, too. It’s possible the mix was done this way – low and muddled – to resemble old 70s grindhouse movies, but there are subtitles, so it’s not a big problem. It’s possible the sound needed to be as crappy as the images to fit the visual style. The music, however, is in a different league. While not always technically top notch (to keep with the low budget style?) the musical atmosphere is very John Carpenter meets Goblin. Always a plus! It may not be the most original homage, but nobody can argue against the influence of Carpenter and the Italian masters. There are other tributes and hints too; Sean Connery’s 70s cheesefest Zardoz is referenced, as well as the 1969 drive-in biker film Satan’s Sadists. Joe D’Amato and Jess Franco too. I’m sure there are more; some details can be hard to spot in the collages.

Some of the stronger points of the film include the feeling of a future derelict society which is tangible and very efficient; it does not take much suspension of disbelief to believe in the atmosphere the movie suggests. Locations, props, camera angles and the gritty 16mm film stock add the necessary ambiance. It’s like Mad Max: The road warrior or Escape from New York on pocket money; the environment plays a huge part and it plays it well. The Norwegian parliament in ruins does not look photo realistic, but in a comic book way you get a good idea of what it could look like in 20 years from now if zombies invade. Some scenes are shot in Oslo, a modern and usually busy city, but the location scout (I suppose Markussen did that too) found the right streets with enough dust, uncleaned windows and a few grafitti tags to convince us that zombies have eaten everyone’s brains.

Absolute Xombies is rarely funny and never scary, but it is consistent, unapologetic and uncompromising. The experience of watching the film is probably like that old type of food your grandparents used to eat; very different and too heavy on the fat, but for historical reasons it is nice to have tried it.

This review is based on the 2D version.