You have heard about a sequel to Iron Sky, but the plot outline has been kept secret until now, and to go with it we have collected all the facts and statements we could find about the next Finnish Nazi sci-fi spoof in one place!

Not surprisingly, the indie hit Iron Sky will get a sequel, called Iron Sky: The coming race. The sequel, which was publicly announced in May last year, was decided upon shortly after the Finnish space-nazi comedy proved to be an international succes in 2012, but the idea was much older. Director Timo Vuorensola had ideas for a sequel right from the start of the making of the first film, in 2006, and it will be based on the same overall theme; space Nazis from the Moon. -It’s going to go way further and way crazier, Vuorensola said about the sequel in an interview last November. He also revealed that the new film will take place after the first film, and that the sequel will go deeper into the Nazi UFO mythology. Some characters will return, and the first casting news confirms the return of Udo Kier (as the Moon Führer) and Stephanie Paul (as the President of the United States). About the sequel, Kier said this to EmpireOnline: -I told Timo for the next one we need more blonde women with big breasts. I made sure I didn’t die in the first one. I made sure I was breathing at the end. If you die you can’t come back. I don’t mind playing Nazis, but I’ll only play them in comedies. I wouldn’t play a serious Nazi. 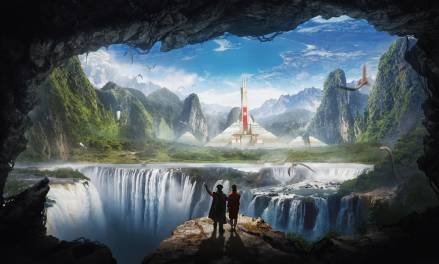 According to the sequel’s Indiegogo page, the producers want to go “darker, we want to go crazier, we want to be more experimental. We believe it’s going to be the most awesome science fiction film of the decade.” To achieve that, the producers have secured the writing team of Dalan Musson and director Vuorensola (the two also collaborated on Warner’s upcoming Jeremiah Harm), Laibach will compose the soundtrack (as they did for the first movie), and the budget will be increased by 50%.

The plot? Back in November, Timo Vuorensola joked about a possible idea for the sequel: -Adolf Hitler riding a dinosaur in the centre of the Earth! He expanded on that in an interview with EmpireOnline: -It’s a bit more epic this time. It starts three million years ago! It actually follows quite a well-known conspiracy theory, The Hollow Earth theory, which is connected to the Nazi UFO theory and the Nazi moon landing theory. It’s a long and winding road, and we’re taking different loops in it, because it’s pretty funny and interesting stuff… He added that there will be Moon action as well.

The director early in the script process.

A press release was recently sent out during the 2014 Berlin Film Festival, outlining the plot as follows: “20 years ago Earth was ruined in a nuclear apocalypse. What’s left of humanity is trapped on the Moon – which is now falling apart as well. Mankind’s only hope is to send a small team into the Center of the Earth to retrieve the mythical Holy Grail. All that stands in their way is an ancient race of reptilian humanoids and an army of dinosaurs. How hard could it be?” Other than that, political propaganda and religion will still be the underlying theme of the movie.

Like the first movie, part of the funding will come from donations on the internet, so-called crowd funding. -I think there’s always going to be studio funding for big productions, but indies are getting harder and harder gaining access to studio money, so crowdfunding is sort of stepping up and helping these productions to happen, Vuorensola said. Initial crowdfunding of the film ended on July 10th, 2013 and a total of 182.557 dollars were raised from 3517 fans, 22.000 dollars more than the target. This was only the first phase though, as the producers believe they need 15 million dollars to fully finance the film. Their plan is to completely finance the sequel themselves, using crowdfunding and other soft money money, to be completely independent in both the script stage and in the distribution stage. The money that was collected last summer will be used to write the script, make a production plan and also shoot a 4-5 minute promo video to raise further money, a campaign that will start later in 2014. The video will be shot late in February at the HQ of the production, the Babelsberg studios in Germany. For the shooting of the actual film, Croatia has been mentioned as a possible shooting location.

Tagline: “From the ashes of mankind, a new breed of superiority shall arise!”

Iron Sky 2 will be produced by Tero Kaukomaa of Blind Spot Pictures through the new company Iron Sky Universe, and Oliver Damian of 27 Films in Germany. The script should be ready by the end of 2014, with shooting taking place in 2015 and a release “sometime in 2016” on “all possible platforms”, according to the director. And should the sequel fail, there has been mention of both a prequel and a TV series in this unlikely Finnish franchise.

3 thoughts on “Iron Sky sequel in the works”