Journey to Saturn (original title: Rejsen til Saturn) is based on a Danish 1977 sci-fi comic book by Claus Deleuran, and tells the story about how a group of astronauts travel to Saturn to claim it as Danish territory, as the planet has great natural resources that industrialist Kurt Maj wants to exploit. But the planet is already inhabited by little green men with superior technology, and they decide in return to suck up all the water on Earth to fuel their army’s UFOs. Our Danish heroes cannot let that happen, of course, but they get awfully close to failure….

An animated sci-fi comedy aimed at older teens and adults, Journey to Saturn is complete with violence, nudity, alcohol, profanity, dirty jokes, and greed. It tries hard to be a satirical comedy about Danish values and touches on relevant Danish themes such as post-war traumas, immigration, and corruption. All this is wrapped in an action-filled story that is never boring, but not necessarily funny either. It’s there, where silly animated action meets flat social commentary, that the movie fails big time. How many times must we see Danes open up beer bottles before we understand that beer is what they love the most? Additionally, characters are repetitive, and the jokes are almost always physical and visual, which points to a lacking script. Being a cross between Mars Attacks and 2001: A Space Travesty, the film employs a childish form of low-brow humour, where beer and boobs play a big role, which is strange since the film is made for adults – the comedy is just too simple in the long run. Beer and boobs could work if there was also a bit more intelligence involved, but the satire is buried deep and the film doesn’t reach beyond Sunday morning TV sci-fi.

The animation is OK, but nothing more. There is little texture and few details, except the stiff nipples of the heroine. Clearly 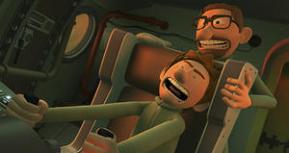 this is a moderately budgeted film from one of Europe’s smallest countries, and thus the animation will never compete with its US competitors. This is not necessarily a bad thing, but in CG animation the technical and visual aspect can an additional dimension, which this movie needs.

One thought on “Review: Journey to Saturn”