This winter’s most anticipated Christmas film comes from Finland and director Jalmari Helander. In the depths of the Korvatunturi mountains, 486 metres deep, lies the closest ever guarded secret of Christmas. The time has come to dig it up!

Christmas has long and solid traditions

in the Nordic region; it predates Christianity in the form of a midwinter sacrifice feast called jul (hence the English word yule). It’s funny how nobody has made a film about that; Vikings sacrificing to get the sun back. There’s potential there for a lot of fun, blood and snow. While horror movies about Christmas isn’t a rare thing, it is a rare thing in the Nordic region, but now Jalmari Helander unleashes Rare Exports just in time for Christmas. It has been called “the Gremlins of Santa movies”.

Official synopsis: It’s the eve of Christmas in northern Finland and an archeological dig has just unearthed the real Santa Claus. But this particular Santa isn’t the one you want coming to town. When all the local children begin mysteriously disappearing, young Pietari and his father Rauno, a reindeer hunter by trade, capture the mythological being and attempt to sell Santa to the misguided leader of the multinational corporation sponsoring the dig. Santa’s elves, however, will stop at nothing to free their fearless leader from captivity. What ensues is a wildly humorous nightmare – a fantastically bizarre polemic on modern day morality. Rare Exports is a re-imagining of the most classic of all childhood fantasies, and is a darkly comic gem soon to be required perennial holiday viewing.

Rare Exports is an action- 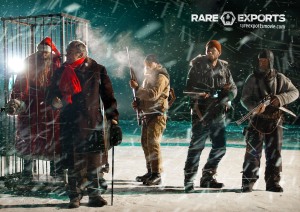 fantasy-comedy feature based on award winning shorts by director Jalmari Helander that have already built a cult reputation in the internet. The finished feature has being received with great enthusiasm at film festivals around the world this summer, including three awards at the Sitges fantasy film festival, of which two were Best Movie and Best Direction. The film is a Swedish-Finnish-Norwegian-French co-production made on a budget of nearly 2 million euros. Despite it’s Swedish financiers and Nordic theme, it will not open in theatres in Sweden, due to distributors thinking Swedes don’t want the film to mess with their cosy idea of Santa.