Legends of Valhalla: Thor is an upcoming animated feature aimed at children. Coming to theatres in stereoscopic 3D, it is an action adventure comedy, and not surprisingly for an Icelandic fantasy film, it focuses on Nordic mythology and viking gods.

Under the direction of Oskar Jonasson and co-director Toby Genkel, Legends of Valhalla: Thor is scheduled to open in theatres in the fall of 2011 as the first Icelandic 3D film ever, and is also the first animated feature to come from the saga island.

Thor and his hammer.

The story is about the young blacksmith Thor who lives with his mother in a small Viking village. Because Thor is said to be the son of Odin, the king of gods, the villages believe they will never be attacked. Unfortunately they are wrong, and an army of giants destroys the village and take the inhabitants to Hel, the queen of the underworld. Thor is left behind but sets out to save his friends with a hammer called Crusher, supposedly a magical weapon.

The original story was written for the film by Fridrik Erlingsson, who – as part of the development of the film – wrote a book in 2008 called Thor – the Wrath of Hel. It made it to the local best seller list, while a second book, Thor – The Secret of the Gods came out in October 2010. Both the books and the film are inspired by Nordic mythology as documented by the poet, teacher and historian Snorri Sturlason in his famous Snorri-Edda, published in the year 1220. -We allow ourselves to claim that we have around 800 years of development behind us, producer and Caoz CEO Hilmar Sigurdsson says to Nordic Fantasy. While both ancient Viking sagas and Nordic mythology could be violent, the books are aimed at children aged 9 – 12, and the movie targets the same demographic. 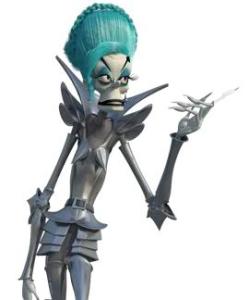 Hel, queen of the Norse underworld.

As an international production, the film will open with spoken languages in English, Icelandic and German, but will be dubbed in other languages too. However, voice actors have not been revealed yet, as an announcement is expected early next year.

Legends of Valhalla: Thor has a budget of 8.3 million Euros and is a co-production between Caoz in Iceland, Ulysses Filmproduktion in Germany and Magma Productions in Ireland. Currently there are just under 80 people working on the production in four studios in Reykjavik, Bremen, Hamburg and in Galway. The film has already been sold to 38 countries, including the Nordic region, Germany, Benelux, Italy, Mexico, Latin America, China, the Middle East and more. The film is expected to premier next fall in the Nordic markets.

Legends of Valhalla: Thor should not be confused with Marvel’s live-action Thor, also coming to theatres in 2011.