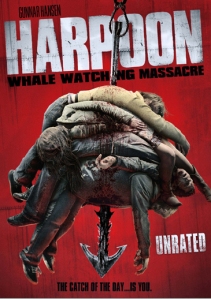 Iceland’s first horror film, aptly titled Reykjavik Whale Watching Massacre, debuts on DVD in the US in December, and will also be made available in many other countries.

Movies become unique when they are grown from local conditions, and what is more Icelandic than whales and whale hunting? Maybe vikings, but they don’t exist anymore. Whales do and therefore director Julius Kemp released Reykjavik Whale Watching Massacre (aka. Harpoon) in theatres in Iceland in September 2009, and the film is now getting wider distribution, after deals having been inked with distributors in the US, the Middle East, Slovakia, Germany, Japan and France. Among the distributors are E1, Front Row, Pegas Film, Telepool, Uplink and Initiative Cinema. The DVD has been out in the UK since May.

The film is Iceland’s first horror

feature, which meant it was a challenge to sell it to local audiences. The plan was always to sell the film abroad, though. The director says to Iceland on Screen that he “hopes it’s basically Texas Chain Saw Massacre meets Mulholland Drive because I like the mood there.”

The US release will be as an unrated DVD, BluRay and VOD (video on demand) from Image Entertainment on December 4th as Harpoon: Reykjavik Whale Watching Massacre, or simply Harpoon for the less tongue-bending inclined. The film, which was written by Sigurjón B. Sigurdsson and directed by Julius Kemp, stars Gunnar “Leatherface” Hansen, Terence Anderson, Ragnhildur Steinunn Jónsdóttir and Miranda Hennessy. When a bloody freak accident takes out their captain, a boatload of international tourists on a

whale-watching expedition must fight for their lives while stranded in the middle of the ocean. Help seems to arrive in the form of a helpful whaler who offers to take them back to shore, but instead he strands them on a rusty, terrifying barge of death with his insane family who are determined to hunt down and kill the trespassers one by one!

The only extra on both discs is a “Behind the Scenes” documentary, and the soundtrack is in English, so no subtitles are needed (they’re not on the discs either).