Max von Sydow, Peter Stormare, Stellan Skarsgard, Lena Olin – all well known Scandinavian actors working in Hollywood. For us native Scandinavians it’s always an event when artists from some of the smallest countries in Europe make way in the most prestigious film market in the world, and directors are going that way too.

Currently, Norwegian director Harald Zwart is the biggest money-making Scandinavian in Hollywood (Agent Cody Banks, Pink Panther 2, Karate Kid remake) but has yet to tackle a big sci-fi or fantasy project. Someone who may do that is Swedish commercials director Adam Berg, who is tipped to helm the upcoming Deadpool movie, after Robert Rodriguez having left the film. Berg is not at liberty to confirm his involvement, but Los Angeles Times has broken the news. Deadpool is a Marvel superhero movie based on a character that last was seen in X-Men origins: Wolverine. Berg is an established director of music videos and commercials.

Nazi-zombie-splatter sensation Dead Snow‘s director Tommt Wirkola is attached to direct Hansel And Gretel: Witch Hunters, a horror-comedy scheduled for a 2011 release, produced by Will Ferrel’s production company. The Norwegian director describes the movie like this: “We meet Hansel and Gretel 15 years after the famous story, when they have become great witch hunters. It will be an action-adventure movie with horror and comedy elements. It will be rough and bloody.” Noomi Rapace (from the Swedish Millenium films) and Jeremy Renner (The Hurt Locker) has been cast to play the titular characters, based on a script by Wirkola and supported by a budget of about 34 million USD.

Danish director Lars von Trier (The Idiots, Antichrist), since long established in the art-house scene, is currently finishing up an “unhappy” sci-fi movie, Melancholia, and although it is not a Hollywood production per se, it features some big names; Kirsten Dunst, Kiefer Sutherland, Charlotte Rampling, John Hurt, Stellan Skarsgård and Udo Kier suggest the movie will be taken notice of. Melancholia a psychological sci-fi disaster movie about people trying to deal with Earth coming to an end. The movie is scheduled for a May 2011 release.

Scheduled for a January 2011 is Prowl, directed by Norwegian Patrik Syversen and starring Ruta Gedmintas, Joshua Bowman, Courtney Hope and Bruce Payne. The Norwegian directed the gritty horror Manhunt (Rovdyr) in 2008 but is now 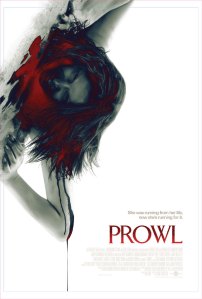 finishing Prowl which is slated to be part of the After Dark Originals lineup. The film was given an R rating the MPAA for bloody violence, language and some teen drug and alcohol use. The film is about Amber, a young girl who goes apartment-hunting in a big city. With some friends she takes a ride in a semi, but the driver refuses to stop and they discover that the cargo is cartons of blood. The truck disgorges into a dark, abandoned warehouse where blood-thirsty creatures have learnt to hunt human prey.

Mikael Håfström (Derailed, 1408) of Sweden will release his next US movie The Rite in January 2011. This drama-thriller with horror elements is about an American priest who travels to Italy to study at an exorcism school. We’ve read a plot summary and it sounds like a demon-exorcist kinda film. Actors include Alice Braga, Anthony Hopkins, Rutger Hauer and Franco Nero. Håfström’s CV in Sweden includes thrillers, TV horrors and crime movies.

November 22 update: Swedish directing duo Måns Mårlind and Björn Stein (known in Sweden for historical drama Snapphanar and sci-fi drama Storm) has been hired to direct Underworld 4 for a 2012 release. The film marks the second English language movie for the pair, who directed the UK thriller Shelter in 2009. Mårlind and Stein will direct the film for Screen Gems and Lakeshore Entertainment from a script by John Hlavin. Kate Beckinsale once again takes the lead as vampire warrior Selene. Shooting begins in Vancouver in March 2011.

Scandinavian directors have a certain reputation in Hollywood, a reputation which is often wrongly tainted by the legacy of previous generations of directors, primarily Ingmar Bergman (no offence to the Master!). These days, Nordic and especially Norwegian horror is paving the way for a new generation, and we hope these new movies will make a dent in audiences’ minds.

2 thoughts on “Scandinavians in Hollywood”