Dark Souls seems to be a promising Norwegian horror movie, scheduled for a January 2011 release. The independently made movie features a great cast, oily zombie creatures and power-drill mayhem!

Written and directed by Mathieu Peteul and Cesar Ducasse (the latter known for directing the sci-fi indie Lies Inc.), Dark Souls (Mørke Sjeler in its original language) is about a young girl, Johanna, who is attacked and seemingly murdered. Her father receives a phone call from the police pronouncing her dead as he sees her walk in the front door of their house. Strange things begin to happen to Johanna; she is disorientated and becomes pale and

unresponsive. Similar attacks begin to happen and Johanna’s father takes it on himself to find out the truth. He embarks on a dark thrill ride of lost memories, conspiracy and zombie-like symptoms. Finding the mysterious darkness within is the source of the bizarre world he has uncovered.

The Cambridge Film Festival describes the movie: “The ruthless greed and ecological devastation of the oil industry form the backdrop to Dark Souls, a stylish horror which uses homage as a springboard for its original take on the genre. Lazy clichés such as the slasher movie’s ‘last woman standing’ rule are subverted: our hero is not a nubile teenager but a bewildered, overweight father looking for the man who drilled his daughter, leaving her zombified. References to horror classics are skilful and witty, for example the homeless oil diver’s expositional monologue which mirrors Quint’s famous speech in Jaws. Winner of Best Horror at the Manhattan and Swansea film festivals, Dark Souls brings slick thrills and oil spills without resorting to easy scares.”

Starring Morten Rudå, Kyrre Haugen Sydness, Ida Elise Broch, Johanna Gustavsson, Jan Hårstad, Karl Sundby, Marianne Rødje and Henrick Scheele, Dark Souls is not released in its home country Norway until January 14, 2011 but has already made it big in the festival circuit. The film won the Best Horror Film award at the Swansea Bay Film Festival in UK, and won the 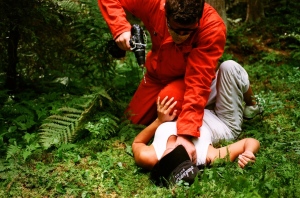 audience award for Best Movie at the Manhattan Film Festival in July. It also got the Jury’s Award for Best Movie at the SP Terror Festival Internacional de Cinema Fantastico in São Paulo, as well as the Best Director Award at CineFantasy in the same city. In August lead actor Rudå won the Best Actor award (of a foreign fim) at the Melbourne Underground Film Festival in Australia. The film has appeared at numerous other film festivals across the world.

One thought on “Dark Souls preview”